Blogpost - ESCAPE at the RDA House of Commons

Home / News / Blogpost - ESCAPE at the RDA House of Commons 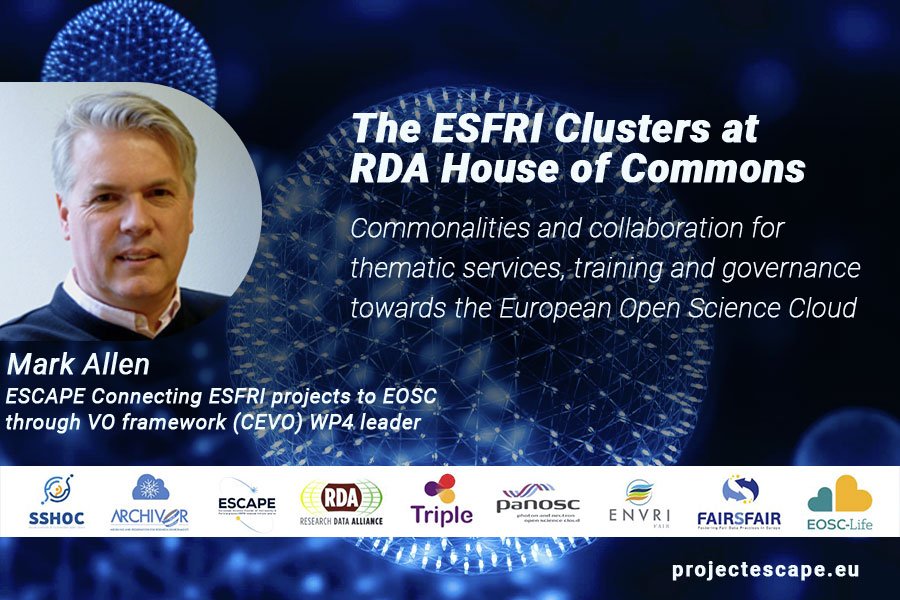 I was very pleased to represent the ESCAPE project in an event called The ESFRI Clusters at RDA House of Commons held on 19 April 2021 and co-located with the Research Data Alliance Plenary 17. As all events these days, it was ‘virtual’, but to counteract the ‘zoom fatigue’ the organisers set up a lively house-of-commons styled debate. It worked! — representatives from  ESFRI Clusters SSHOC, PaNOSC, ENVRI-FAIR, EOSC-Life and ESCAPE, other EOSC related projects ARCHIVER, FAIRsFAIR, as well as TRIPLE and RDA came together to debate the commonalities and collaboration for thematic services, training, and governance towards the European Open Science Cloud.

The debate that I participated in was on the topic of ’Thematic Services’ where Eva Mendez (FAIRsFAIR and RDA Europe 4.0 ambassador for interdisciplinary research) challenged the teams to address her statement,

“Metadata — Everyone thinks it's a great idea, but no-one wants to use someone else’s”.

This subject is an important one for Open Science. There’s no doubt that metadata is a great idea and that it is at the core of making data FAIR. The intentionally provocative part of the statement, about using "someone else’s” metadata, brings out the issue of defining common interoperability standards in the context of thematic services and their federation in EOSC.

In this ‘House of Commons’ styled debate we were assigned into red and green teams to argue for and against the statement. I was partnered with Daan Broeder from the SSHOC project, as the red team. The green team was Carole Goble from EOSC-Life and Joao Fernandes from ARCHIVER. The debate was animated by the charismatic Martijn van Calmthout who did his best to bring out the opposing arguments. In the end it didn’t seem to matter which team you were on, it was an effective mechanism to put the statement to the test.

The points of discussion that stood out to me were those related to the scope and granularity of metadata. The question of ‘what metadata are we talking about’ arose quickly in the debate. On one hand the diverse range of research data concerned by the different Science Clusters makes it challenging to define a detailed schema of common scientific metadata to suit all purposes. On the other hand, we can recognise that there is already a good basis of common metadata systems that are currently in place such as the Dublin Core and OAI-PMH, which are widely used. It seems to me that the main issue is the interface between these types of metadata, and how they will be federated in EOSC.

One of the main points that the debate converged on was the need for agreement and standards. This is directly related to the activities in the WP4 of ESCAPE where the detailed scientific metadata standards needed by the astrophysics ESFRI are being developed in the framework of the International Virtual Observatory Alliance (IVOA) and the generic metadata of all of the Virtual Observatory services is integrated into standard systems that will interface with EOSC (currently implemented in EUDAT B2FIND). Progress in these areas is reported in ESCAPE project deliverables D4.2.

There were two other debates on the program for "The ESFRI Clusters at RDA House of Commons” and the report that is being prepared will provide more details and will be a useful resource. There is also a different kind of impact that comes from this and other events that bring the Science Clusters together — we learn from each other and we build up a better understanding of the common challenges we face to make EOSC a reality. Such coordination is necessary as we often hear the question in EOSC discussions of “Where are the researchers?”. My answer to that is, "They are using the thematic services in their domain", and as such the Science Clusters have an important role in EOSC as a main connection to the scientists who will use the system. I look forward to the next events such as the EOSC symposium where we will interact with our Science Cluster colleagues and the other actors in EOSC.

SUBSCRIBE TO THE ESCAPE NEWSLETTER TO RECEIVE UPDATES ABOUT OUR ACTIVITIES