The first ESCAPE Citizen Science project, Clump Scout, has been launched: take a look at galaxies! 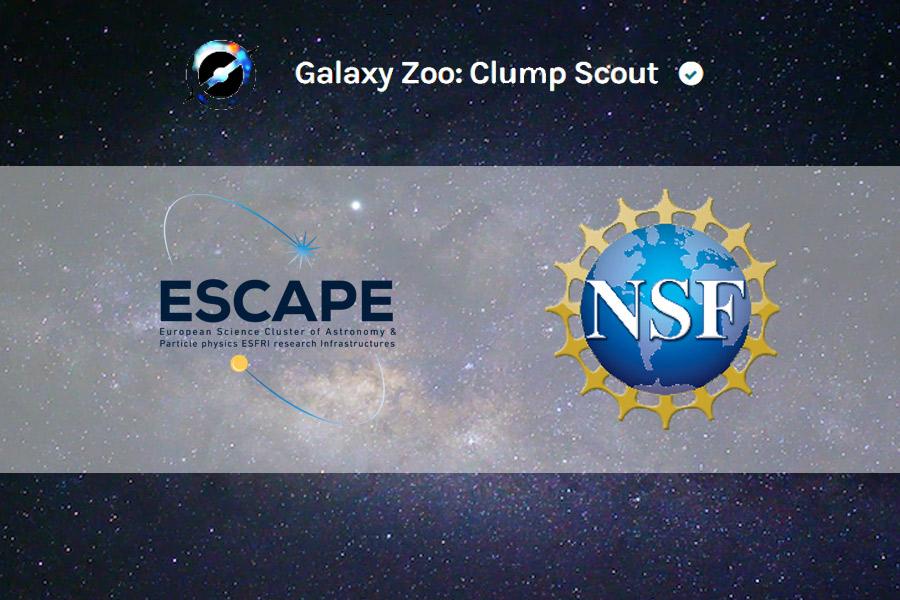 Citizen science is scientific research conducted, in whole or in part, by amateur or non professional scientists. The very first ESCAPE Citizen Science project, named Clump Scout, will take a closer look at galaxies that were classified in the Galaxy Zoo 2 project. In that project, volunteers answered questions about galaxies shape, structure and properties. This time they’ll be examining them in an even more detailed way.

In the nearby Universe, most galaxies can be categorized as spirals, ellipticals, or irregular systems. However, in the more distant (and younger) Universe, galaxy shapes were more diverse and galaxies with "clumpy" structures dominate. Galaxies of the past went through a period of intense star formation which is thought to be largely responsible for these unusual shapes. This period of star formation has since died off and most galaxies today have settled down into the types we see in the local Universe. That is to say, "clumpy" galaxies weren't thought to exist in large numbers today.

The Galaxy Zoo 2 project focused on nearby galaxies and it turns out that dozens of "clumpy" galaxies were discovered in our own cosmic backyard!

After discovering that the local Universe harbours so many clumpy galaxies, scientists decided that they need to reconsider the galaxies classified during the Galaxy Zoo 2 project, which never actually asked if a galaxy appeared clumpy!

The Clump Scout project invites volunteers to take a second look at a subset of the original Galaxy Zoo 2 images that had been almost unanimously classified as having visible features. If they do see any clumps the volunteers will be able to click on them to tell astronomers where they are.

Part of the reason why Clump Scout is so exciting is that this is the first time human eyes will examine so many clumpy galaxies first-hand. Thanks to the help of citizen scientists, the Clump Scout project scientists will be able to examine over fifty thousand galaxies. This will be one of the first large-scale studies of clumps in local galaxies!

If you’d like to try it out, you can take part here.

The citizen science methodology is uniquely well suited to many data mining challenges faced by the ESFRIs in the European Open Science Cloud. The ESCAPE approach is the best for getting the general public genuinely involved in the scientific discoveries of the astronomy and physics facilities in the European open science cloud.

If you're interested in astronomy or physics, and you want to make a real scientific contribution, come join our citizen science projects and be part of the open science revolution!