The Next Generation Neutrino Telescopes & Open Science – KM3NeT and ESCAPE 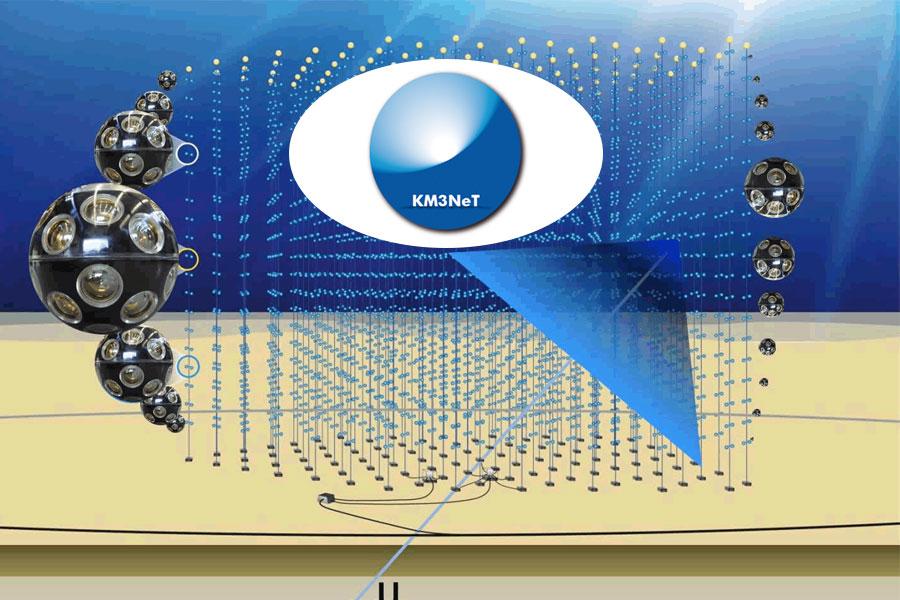 KM3NeT is the future research infrastructure which will host the next generation neutrino telescopes, to be located at the bottom of the Mediterranean Sea. KM3NeT will search for neutrinos from distant astrophysical sources such as supernova remnants, gamma-ray bursts, supernovae or colliding stars and will provide a powerful tool in the search for dark matter in the universe. The prime objective of the facility is to detect neutrinos from sources in our galaxy. Together with other initiatives, KM3Net will view the full sky and form a global neutrino observatory.

Neutrinos are a result of certain types of radioactive decay, or nuclear reactions such as those which take place in the Sun, in nuclear reactors, or when cosmic rays hit atoms. Due to their weak interactions with matter, neutrinos offer a unique opportunity to observe processes that are inaccessible to optical telescopes.

KM3NeT was conceived from the very outset to provide the research infrastructure necessary for multi-messenger astronomy. Extremely high energy neutrinos are expected from galactic or intergalactic astrophysical sources, and therefore need to be correlated with observations by optical telescopes, radio telescopes gamma-ray and gravitational wave detectors.

Collaboration with complementary science will boost scientific discovery. Joining forces with the other ESFRIs involved in ESCAPE, KM3NeT has come one step closer to bringing their research work to the service of Open Science.

Prior to involvement in the ESCAPE initiative, Open Science opportunities were handled internally by KM3NeT, by creating links with members of their own community. Now, teamed with ESCAPE,  KM3NeT has expanded its horizons, by promoting its results (such as methods, data and software) via the European Open Science Cloud (EOSC).

Thanks to the EOSC, KM3NeT results are accessible to a wide audience of researchers, and science and technology professionals have the means to collaborate on some of the world’s most pressing societal challenges more than ever before. This will enable KM3NeT not only to reach new audiences and forge closer bonds to the other ESFRIs involved in ESCAPE, but also to harmonise its data sharing thanks to the Virtual Observatories standards.

KM3NeT make their services and software available via the ESCAPE Open-source Scientific Software and Service Repository (OSSR), which has a mission to share high-quality, well documented, and easy-to-use software solutions in a harmonised way using a well-defined interface. The ESCAPE Data Infrastructure for Open Science (DIOS) provides a potential federated data infrastructure to manage KM3NeT’s data and combine it with other data from large national research data centres to multi-Exabyte levels.

ESCAPE Science Analysis Platform (SAP) will allow KM3NeT to carry out harmonised multi-messenger data analysis across other ESFRIs. All of KM3NeT’s open data will be published on the ESCAPE Virtual Observatory (VO) using the adequate standards for interoperability. ESCAPE Citizen Science (CS) may also help bring KM3NeT closer to the citizen scientist through the creation of dedicated KM3NeT citizen science projects.

Once fully completed, the KM3NeT research infrastructure will consists of several large sub detectors, arrays of thousands of optical sensors that will detect the faint light in the deep sea from charged particles originating from collisions of the neutrinos and the Earth. ESCAPE’s services will support KM3NeT on addressing profound questions about the structure and evolution of the universe while facilitating interdisciplinary research.