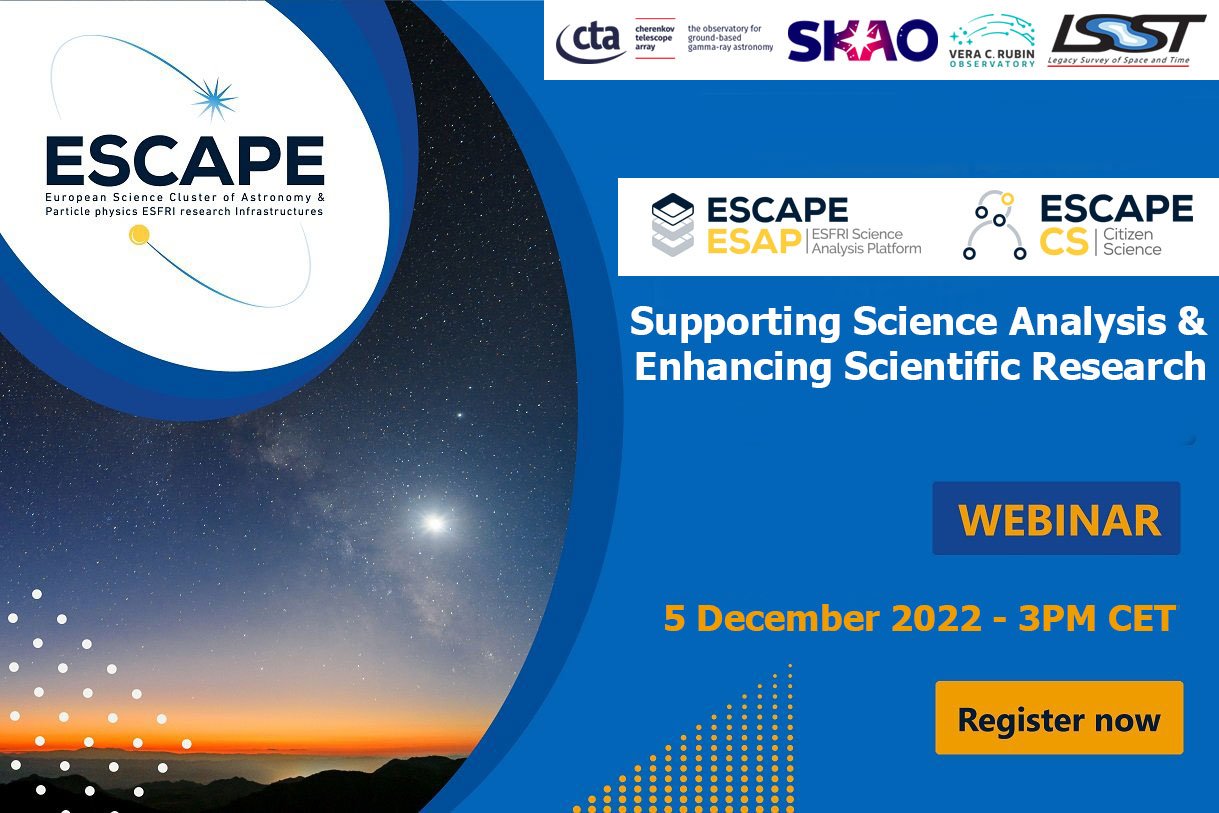 Science platforms are central hubs where users can access and analyse data, collaborate with their colleagues, and publish their results. ESCAPE ESAP (ESFRI Science Analysis Platform) provides a common framework and toolkit for building science platforms, making possible for ESFRIs — together with other projects and institutions — to quickly assemble their existing and new service offerings to form coherent and approachable platforms that directly meet user needs and help them get their science done.

A very wide range of scientific data analysis involves problems that cannot easily be solved algorithmically. Machine learning algorithms can in principle approximate any function, but even they typically require truth sets for training. Therefore crowdsourced data analysis by volunteers, ie citizen science, is critical for many science goals. This also engages by far the largest, and arguably the most overlooked, group of EOSC stakeholders: the science-inclined public. This is when ESCAPE CS (Citizen Science) comes into play.

In the webinar "ESCAPE ESAPE and Citizen Science | Supporting Science Analysis and Enhancing Scientific Research", we will present the ESAP system, and describe how various services, data products, and tools from across the ESCAPE project have been integrated into it. We will also demonstrate how ESCAPE CS has been helping ESFRIs in solving the deepest secrets of the universe.

John Swinbank is the Science Data Centre Programme Manager at ASTRON, the Netherlands Institute for Radio Astronomy, where he is developing techniques and services to make data from cutting-edge radio telescopes — LOFAR, Westerbork/Apertif, and ultimately the Square Kilometre Array — available to the widest possible community in the most scientifically productive way possible. Before joining ASTRON in 2020, he was the Deputy Project Manager for Data Management at the Vera C. Rubin Observatory (formerly LSST), with a particular interest in the software pipelines used to generate both annual data releases and rapid transient alerts, and was also a Research Professor at the University of Washington in Seattle. He has worked on the development of astronomical transient alert systems within the context of the International Virtual Observatory Alliance, and contributed to a wide range of open-source astronomical software, including participating in the governance of the Astropy Project.

Gareth Hughes is a member of the Cherenkov Telescope Array Observatory (CTAO). He works in the computing department with a primary focus on ESCAPE topics. CTAO has been active in several work packages (including DIOS, ESAP, OSSR & CEVO)  and has also helped coordinate CTAO contributions to the ESCAPE project.

James Collinson is an Operations Data Scientist at SKAO, and is part of the team developing the software for the distributed network of SKA Regional Centres

Stephen Serjeant is an Open University's Professor of Astronomy,  specializing in extragalactic surveys of star-forming galaxies, strong  gravitational lensing, infrared astronomy, crowdsourced data mining and  machine learning. He leads the Engagement and Communication  work package of the H2020 ESCAPE project, building citizen science into  the European Open Science Cloud, having led the equivalent work package  in the ASTERICS multi-messenger astronomy H2020 project. He has  consulted on many BBC television series, including  Stargazing Live, Bang Goes The Theory, and the 2021 BBC series on  astronomy, Universe. Previously he was Head of Astronomy Discipline at  the Open University (2010-2016) and he has worked at the University of  Kent and Imperial College, following his doctorate  at New College Oxford and first class honours degree from Bristol University.

James Pearson is a postdoctoral research associate at the Open University in the UK. His previous work utilised Bayesian deep learning models to quickly and accurately determine the physical parameters of strong gravitational lensing systems in astronomy. Supported by ESCAPE, James now leads the work on a new citizen science project, Galaxy Zoo: Cosmic Dawn, which is creating crowdsourced classifications of galaxies in images from the 8.2-metre Subaru telescope in Hawaii, in preparation for the premier deep field observations with the forthcoming Euclid space telescope. He is also creating material to help researchers manage their citizen science projects through ESCAPE's ESFRI Science Analysis Platform (ESAP).